Celebrity Chef Robert Irvine Does It All 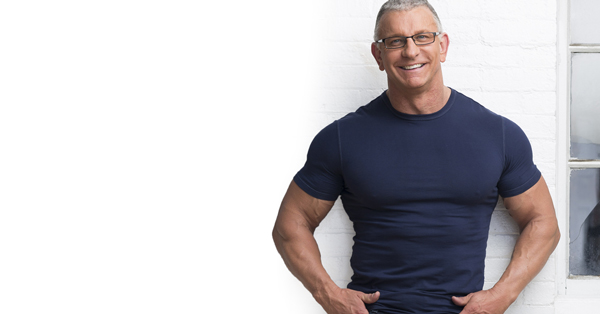 As the celebrity chef behind Restaurant: Impossible launches a new daytime talk show, The Robert Irvine Show, he spoke with Muscle Media about how he balances his supercharged career with training and proper nutrition.

You’ve probably noticed him on the Food Network because he’s the chef that doesn’t look like any of the others. By any standard, Chef Robert Irvine is jacked. Seriously jacked. And in his case, it’s a truly notable feat, and not just because the British Royal Navy veteran is 50 years old. Chef Irvine travels over 300 days a year, owing to a rigorous filming schedule, his live show (Robert Irvine LIVE) and his constant charity appearances and USO tours. The breakneck pace of his schedule demands that he constantly think a few steps ahead. When he’s landing in a new city, he has already researched the best place to train when he lands. And when you see him in action—how he wastes no time in or out of the gym—you start to understand why he doesn’t accept any excuses from anyone he deals with on TV.  We recently caught up with Chef Irvine to talk to him about his training and nutrition philosophy and what’s in store for his new show.

Muscle Media: You’ve said that you research gyms before you land in a new city. It sounds like it’s important to you that you find a place that doesn’t just have the equipment you need, but the right vibe as well.

Robert Irvine: Yes, but don’t get me wrong; there are a lot of situations I find myself in where I only have time to use the hotel gym or even just work out in my hotel room. When I’ve been in a real bind, I’ve worked out at places like Planet Fitness, though I really prefer not to. I always want to find the closest Gold’s Gym or a local place that’s just like it—where there’s no nonsense. I love being around people who want to work hard. That always has the effect of pushing you that tiny bit further than you’d normally go if you were training on your own. Whenever I’m in the area and have the time, I love going to Golds in Venice, CA. There’s no place like it in the world.

MM: That is funny you mention Planet Fitness. In your training and nutrition book Fit Fuel, you call them out for a number of issues, like offering free bagels and pizza to their members.

RI: Yeah, I did mention them by name, but it’s more of a general attitude that I was addressing. There’s a mentality that a lot of people have that just showing up is enough. People do it at work and they wonder why they can’t get a raise or get promoted. They do it in the gym and they wonder why they’re still out of shape. They do it in a marriage and then wonder why it fell apart. It’s not enough to show up to anything. You have to bring passion to whatever you’re doing, or it’s a waste of time.

MM: And you’re clearly passionate about training. You’re in better shape now than when you first got on TV with Dinner: Impossible in 2008. What is your training like these days?

RI: It hasn’t changed much from then to now. I like to do a traditional body part split. On an ideal week, that means I’ve got a day for chest, a day for back, a day for legs, a day for shoulders, and a day for arms. If I know I’ll have to miss a session because of a hectic travel schedule, I’ll combine some of those days and cut out a few sets. Overall, what I’ve gotten much better with is taking less time between sets. As long as you move with a purpose, get a great pump, and keep the sweat pouring during your workout, that’s most of the battle right there.

The rest of the battle is nutrition. I’ve cleaned up my diet considerably in the last few years. My wife Gail is a professional wrestler in TNA. She has always eaten clean, and she was a big influence on me. I actually had high blood pressure and cholesterol before I met her. I thought I was OK because I hit the gym regularly, but once I saw how meticulous she was about what she ate and what great care she took with every aspect of her diet, it made a big change in me. That’s when I really started to lean out. It’s not usual for a guy in his late 40s to all of a sudden have a six pack, but I did it! As you know, diet has an even bigger impact on your physique than training.

MM: What sort of changes did you make to your diet?

RI: I cut way back on simple carbs, cut out fried food almost entirely, incorporated more vegetables and fruit, and replaced fatty sauces in a lot of my recipes with the right amount of heat. A little bit of heat—in the form of sriracha or other spices—goes a long way to making a dish more satisfying. The changes that I made formed the basis for the recipes in Fit Fuel. I looked at some of my best dishes throughout the years and tried to imagine how I could make them healthier. In all cases, the healthier versions were just as good as the originals, and sometimes even better.

MM: What’s a popular misconception about proper nutrition that you want to dispel?

RI: I know that a lot of people don’t have time to cook. Businessmen and women who travel a lot—I sympathize with them. I travel a lot, too. But the big misconception is that when you’re traveling, you have to find a specialty health restaurant, or you’re out of luck. That just isn’t true. Go to any restaurant and ask for steamed veggies and grilled chicken. Or ask the chef to hold any rich, buttery sauces and sides. A lot of places will say they don’t make substitutions, but ultimately, they want to keep their customers happy, and they want your business. Call the restaurant ahead of time or tell the host what your dietary needs are. In my experience, nine times out of 10 they will accommodate. They accommodate me, and not because I’m a TV chef. It’s because they want the business.

MM: In the spring you wrapped Season 13 of Restaurant: Impossible, and you’ve just started a new daytime talk show, The Robert Irvine Show, premiering Sept. 12 on the CW. What can you tell us about it?

RI: It’s a conflict resolution show. It was really born out of the conflict resolution segments that we would do on Restaurant: Impossible. In the process of fixing failing restaurants, we often had to patch up broken relationships. We’re going to have people on this show with serious problems who need to make a big-time change in their lives. We’re providing a forum for them to hash out their issues and give them the guidance they need to make the necessary changes.

We’ll address a lot of rocky relationships, but for the people who need to get healthy, we’ll be showing them how to train and cook healthy meals. I’m tremendously excited for it. It’s a dream come true for me. We have an opportunity to make a real difference in peoples’ lives.

MM: You do a lot of USO tours and have your own charity, the Robert Irvine Foundation, which supports members of the military and their families. What drives your work with the military?

RI: I’ve been blessed with a lot in my life and career. And why? Because I’ve been able to pursue whatever drives my passions. And we say that all the time to people: Chase what you’re passionate about. Well, that’s a luxury to chase your passions. In many parts of the world, people don’t have that luxury because they aren’t free. We’re free because of the countless sacrifices of our brave men and women in uniform. We have to give back in any small measure whenever we can. So if a USO tour can entertain them for a little while, I do that whenever I can. If the Gary Sinise Foundation holds one of its Invincible Spirit Festivals, I go to that. With my foundation, it gives me the opportunity to help across a very wide spectrum; we raise money and then allocate it to the military charities most in need. You can learn more about it at RobertIrvineFoundation.org.

MM: You also recently started your own digital magazine.

RI: Yes. Robert Irvine Magazine is a direct continuation of the concepts I presented in Fit Fuel. It has workouts, it has recipes, but above all it has motivation, and it highlights people who are worthy of being emulated. We all need positive examples in our lives. In the magazine, I get to highlight the people who inspire me—people like Medal of Honor recipient Sammy Lee Davis, who’s known as the real Forrest Gump. He went above and beyond to a degree that’s not even relatable; with a broken back and wounds all over his body, he swam right through a direct line of fire to rescue other soldiers. It’s an amazing story. You can read it and a lot of other great ones every month. Just go to RobertIrvineMagazine.com.

A beginner’s guide to creatine

3 Exercises You Should Do for a Stronger Bench

Hydration: Before, During & After Exercise