There are a lot of people who would give a lot to increase their metabolism. Having a high level of metabolism enables one to maintain burn fat and lose weight fast with the least amount of activity. Metabolism is the rate by which the body produces and consumes energy and calories to support life.

There are several factors that affect the metabolism of a person, such as the amount of muscle tissue, the frequency of the meals one consumes, genetics, stress levels, personal diet and activity levels. Metabolism slows down due to the following: loss of muscle because of not enough physical activity, the tendency of the body to cannibalize its own tissue because there is not enough food energy to sustain it, and the decrease of physical activity that comes naturally with old age.

Here are several ways to fire up one’s metabolism:

It is only natural that metabolism decreases along with age, but it is possible to counter the effects. The amount of muscle a person has is a very strong determinant in the ability to burn calories and shed fat. So it goes without saying that exercise is essential. Build strength and resistance by working out at least twice a week, preferably with weights. Do easy exercises in between workouts. Simple tasks such as walking the dog and using the stairs in place of the elevator can already take off calories. The key is to match the amount of eating to the amount of activity one has. Here are some guidelines in getting the right exercise:

-Increase the amount of repetitions of a particular exercise.
-Add the level of resistance
-Utilize advance exercise techniques if possible

A lot of people are ignoring the fact that breakfast is the most important meal of the day. Surprisingly, the ones who eat breakfast are thinner than the ones who do not. Metabolism can slow down considerably if breakfast is taken during mid-morning or if one waits until the afternoon to eat.

Sugar enables the body to store fat. It is recommended that a person consumes food that helps sustain an even level of blood-sugar. Additionally, progressive exercise 2-3 times a week should be in order to stabilize blood sugar.

According to research, it is riskier for people who do not get enough sleep to gain weight. Also, muscles are regenerated during the last couple of hours of slumber. 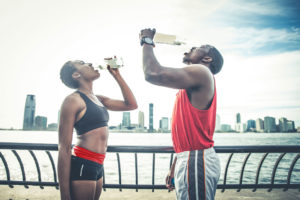 Water flushes out toxins that are produced whenever the body burns fat. Majority of bodily functions involves water. Lack of water causes the body system’s operations to decrease its speed, and produces unneeded stress as a result.

It is advisable to consume 4 to 6 small meals that are timed 2 to 3 hours apart.

People tend to skip meals in order to lose weight, which is a big mistake since it slows down metabolism.

Always prepare the right amount of food to be consumed at the designated intervals. Do not commit the mistake of eating meals in sporadic patterns.

Stress, be it physical or emotional, triggers the release of a steroid called cortisol, which decreases metabolism. Also, people tend to eat excessively when stressed.

It can be used as a substitute for coffee. Tea has the ability to stimulate metabolism, and unlike coffee, it has no undesirable side effects when too much is consumed.

12. Include more energy foods in the diet.

Energy foods such as fruits and vegetables, beans and whole grains.

Achieving the desired body weight is never impossible if one has the determination and patience needed to stabilize the metabolism level, which plays an important role in weight loss. A person needs to realize that eating right and working out is not just a passing fancy, but a way of life.

September 19, 2018 0
The ketogenic diet is the newest trend in health and fitness and is praised by millions as the solution for quick, permanent weight loss....

A Different Approach to your New Year’s Resolution

January 4, 2018 0
It is a New Year. We have had our Holiday celebrations with good food and drinks. Now, many of us want to get healthier...

3 Secrets and Tips For Anti-Aging

April 4, 2019 0
By Muscle Media Anti-Aging, Staying Young, looking younger or just feeling younger is a multimillion dollar industry. There's a really good reason for it. We...

June 19, 2019 0
By Muscle Media For most people, running or walking is the best type of exercise. For this reason, exercise equipment treadmills are still the most...

January 25, 2021 0
By Muscle Media The raw food diet is becoming very popular these days. It is obvious what this diet is. Most of the food that...

January 19, 2021 0
By Muscle Media The aim for beginners to weight training must be to lay the foundations for the intensive workouts that their bodies will eventually...

November 16, 2020 0
By Muscle Media  Any chain of amino acid is protein. An amino acid is the building block of any cell. They provide cells with the...