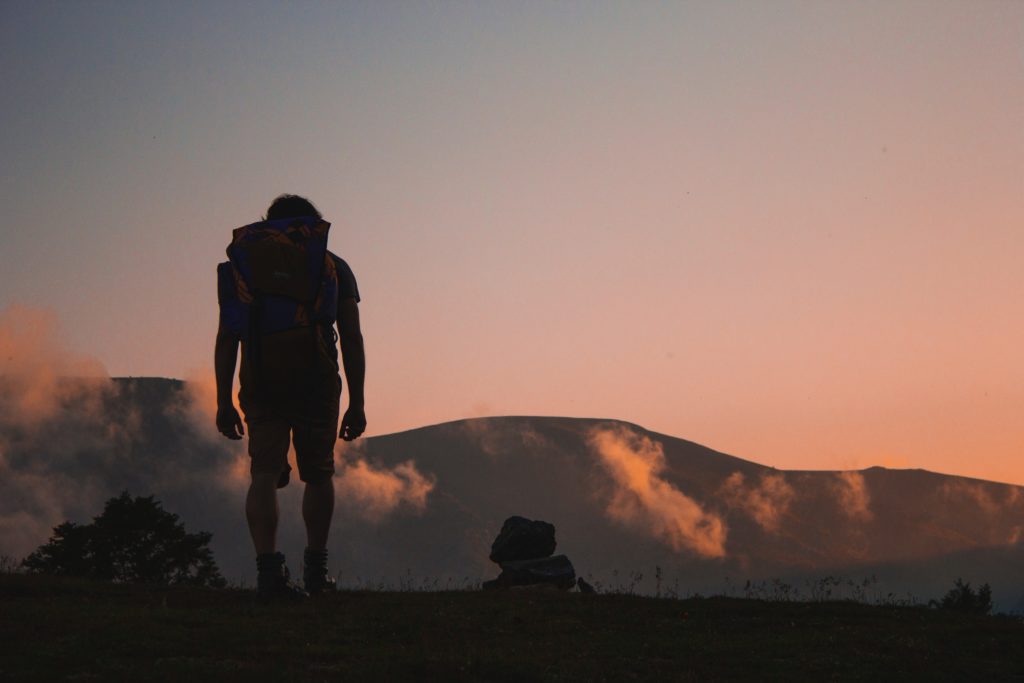 Lifestyle Habits versus Quick Fixes
Mediterranean countries (including France, Italy, Spain, and Greece) and Japan exhibit cultures that date back thousands of years. These cultures have instilled several lifestyle habits that may contribute to their success in longevity. For example, some of the healthy lifestyle habits include meditation, using natural remedies, practicing Traditional Medicine, taking lunch breaks and habitually eating traditional, healthy foods. On the other end of the spectrum, there are those who have attempted to become healthier with “quick-fix” programs. These include fad diets and extreme exercise regimens, found to be so attractive to many in today’s fast-paced cultures. These trials often result in burn-out before they can develop or maintain a healthy lifestyle. One popular quick-fix method for weight loss and other health issues, is the use of medication. Though medication is often necessary, many people avoid seeking more behavioral techniques to manage their health. They refuse long-term lifestyle changes, and are often too quick to seek pharmaceuticals to fix their issues.

Occupational Well-Being
In studies involving Japanese people relocating to the United States, subjects reported that they had fewer opportunities to eat fish and seafood. Instead, they ate more fat and red meat. They also exercised less, due, in part, to more driving and less walking. More than half of the subjects said they consumed more calories and gained weight as a result. But, on a positive note, they mentioned more time to spend with their family.

When Japanese men moved from Japan to Hawaii, the effect of having more family time suggested the decline in longevity among Japanese men may be attributed to the higher-stress work environment in Japan. A major economic decline occurred in Japan during the 1990’. This decline has been attributed to the instability of increasing globalization.

The economic decline affected Japanese men more than Japanese women. Traditional household roles are emphasized among Japanese women more than their involvement in the outside workplace. Therefore, they have had less exposure to high-stress work environments, and their longevity has remained high. However, Japan is rapidly becoming more “Westernized”. Japanese women are now beginning to work more and are being exposed to the same stressors as Japanese men. Workplace stressors have been linked to increased smoking, alcohol consumption, depression, and suicide.

There has also been an increase in associated stress-induced ailments such as emphysema, liver disease and cancer.
This is a valuable finding, indicating the importance of occupational well-being. Regardless of whether a job is too stressful, not challenging enough, or causing a sense of trauma, it can result in prominent health problems. Finding time and methods to alleviate work stresses has become an active area of research. Working part-time, taking up hobbies, accepting a pay cut for a less stressful job, or meeting with a counselor to better manage the stress, could make significant differences in satisfaction and overall wellness.

Social Well-Being
Many of these cultures have established habits and traditions regarding the importance of eating as a social event. Getting into the habit of eating with other people provides organization, decreases stress-eating, and establishes a better mood associated with social well-being. Lack of cooking and organized meals are often a result of busy schedules and/or lack of routine. But, cultures with the highest longevity rates maintain traditions that support the importance of this social time. For example, people in Switzerland participate in what they call a “Mittagspause”, or Lunch Break. During the workday, they will stop working and consume a group meal to socialize, rest, and relax. Many Swiss business establishments will close to take the break themselves, thereby promoting the cultural habit to do so. They designate at least one day each week for a traditional, special meal that includes family and friends. This meal usually includes rich gravy, dessert, or something their typical daily meals would not contain. This compares favorably to the “cheat meal” used in many popular domestic diets to maintain the motivation to eat healthier. It’s important to make a healthy lifestyle desirable to maintain. Associating healthy habits with negative vibes could have undesirable consequences, like reducing social time to adhere to a strict diet, feeling deprived, and burn-out.

Environmental Well-Being
Globalization, linked to the economic depression in Japan, makes it difficult to maintain another contributor to longevity: environmental well-being. Most of the countries ranked highly for longevity emphasize the importance of supporting local produce and public transportation. These are both contributing to countries’ stamina resisting the impact of globalization. Supporting the land by using local produce, limiting fuel emissions by using public transportation, and recycling may increase wellness more than is realized. Encouraging locally grown and produced foods increases the convenience and appeal of healthier, less processed foods. Public transportation is another contributor to a healthy environment. Well-established public transportation systems make it more convenient than using personal vehicles. This also encourages more walking. In Switzerland, children are taught to safely ride their bikes to school before first grade. Consequently, walking and public transportation become a comfortable, familiar habit from an early age. 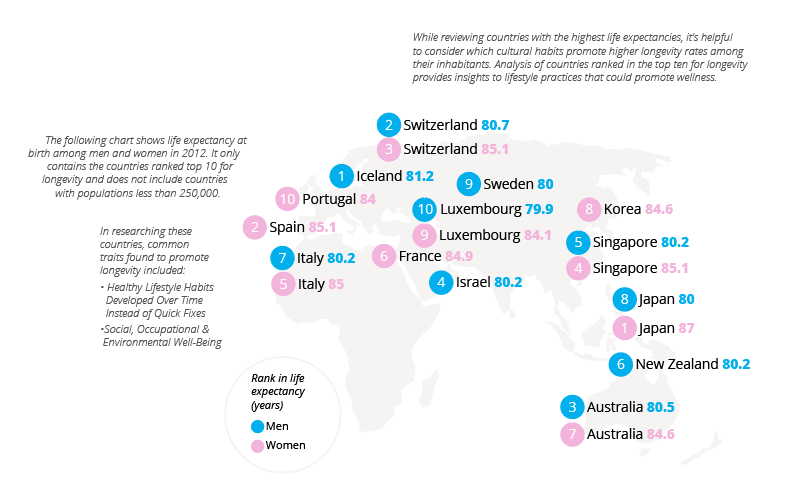 Tradition and Spirituality
Reverting to traditional methods like family meals, cooking, growing vegetables and buying local produce could have a significant impact on wellness. Due to highly processed and unknown ingredients in packaged foods, home-cooking has the potential to make the modern diet much healthier and possibly provide more opportunity for improved social well-being. In 2005, Japan created the Basic Law of Shokuiku (food and nutrition education) to improve health, maintain consumption of domestic foods, preserve local culinary culture and encourage national food self-sufficiency.

The Japanese culture considers eating an event that involves traditions like The Power of Five. Traditionally, Japanese culture incorporates five senses, five colors, five tastes, five ways and five attitudes to their meals:
Five Tastes: Salty, sweet, sour, bitter and umami/savory
Five Ways: Raw, simmered, fried, steamed and roasted/grilled
Five Colors: White, black, red, green and yellow
Five Attitudes: Reflection on where the food came from, reflection on one’s imperfections and deserving of the food, freeing the mind from greed, taking the food as a medicine for good health and accepting the food to fulfill their task of enlightenment

While these Japanese traditions are rooted in the Hindu religion, their concepts could be accepted as non-religious spirituality (a focus on something bigger than oneself). Not only do these traditions raise respect and awareness of the food and why it’s eaten, they encourage a well-balanced diet by incorporating the five colors and tastes. I personally recall watching my friend from Japan carefully peel a clementine into a beautifully-sculpted flower before consuming it. It illustrated the mindfulness of consumption often lost in mindless eating, stress-eating, and rushed meals.

A positive sense of well-being is correlated with healthy habits. Culture also plays a significant role in encouraging or discouraging wellness. It may be difficult to develop healthy habits when the environment does not make it convenient. However, becoming aware of the lifestyle habits that promote longevity and wellness is a step in the right direction. Healthy lifestyle habits should not be perceived as burdensome. Rather, they are opportunities to increase social, occupational and environmental well-being. Whether rediscovering old traditions or making new ones helps to make adherence to these lifestyle habits possible.