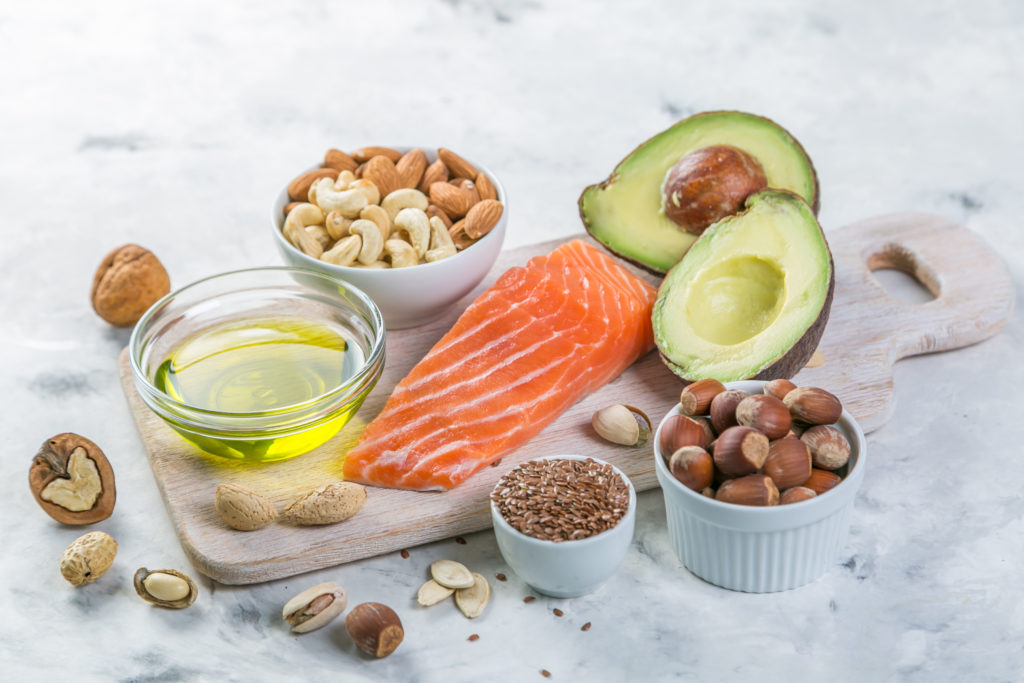 Not all Fats are Equal. Best Fats for Testosterone.

In the early 80’s and 90’s, low-fat diets were the mainstream way to lose weight. It was a diet of chicken breasts and egg whites because we had the misconception that fats were unhealthy. However, what we know today is that dietary fat provides the building blocks to support optimal testosterone production.

Testosterone levels peak during a man’s twenties and subsequently decline over a man’s lifetime. Aging and lifestyle factors such as stress, improper diet, physical inactivity, smoking, drinking, lack of sleep and the use of prescription medications can significantly reduce testosterone levels. Most men don’t associate food with testosterone, but if you’re not getting enough fat in your diet, you may be hurting your bodies natural testosterone production. One of the fascinating studies suggesting that diet can raise testosterone was conducted in 2000 when researchers compared serum sex hormone levels in 42 men who ate lean meat (150 g) or tofu (290 g) daily and found a significantly higher ratio of testosterone to estradiol levels in meat eaters.

Two major studies examining vegan diets to those of meat eaters found that vegan diets elevated the sex hormone binding globulin (SHBG) which binds to testosterone. Excessively high SHBG is problematic especially for males and athletes because it decreases the amount of free testosterone. Elevated levels of SHBG are associated with infertility, a decreased sex drive, and erectile dysfunction, especially when total testosterone levels are already low.

Another factor that increases SHBG is overtraining. In a 2011 Finnish study, researchers assessed the impacts of overtraining on levels of SHBG and total testosterone. Researchers examined military recruits undergoing intense military training. The physical regimen started at 2 hours/day in week 1 and increased to 7 hours/day by week 8.

The researchers took blood samples of the subjects after 12 hours of fasting before weeks 1, 4, and seven where the first blood sample served as the baseline blood levels of SHBG and total testosterone.

Researchers revealed that total testosterone remained the same as the baseline while serum SHBG concentrations increased gradually over the study. Because of the increase in SHBG and the same level of TT, the free serum testosterone levels decreased resulting in lower muscle recovery and ultimately poorer physical performance. In another study, two elite ice hockey teams were put on different diets for seven months. One group received a diet higher in fat and lower in carbs containing 40% fat and 45% carbs, whereas the other team ate less fat and more carbs with 30% fat and 55% carbs (protein intake was identical). Both during and after the study, the researchers saw that the higher fat intake group had higher free testosterone levels, along with lower sex hormone binding globulin (SHBG) levels.

What Types of Fats Are Best for Testosterone?

Cortisol concentrations in this study were not affected by dietary fat. However, this study did not specifically look at the effects of essential fatty acids.Olive oil is a fundamental food in the Mediterranean diet, which has reported beneficial effects on sexual function.

One study reported an increase in serum total testosterone and luteinizing hormone after three weeks of consumption of 25 mL of virgin argan oil or extra virgin olive oil compared with baseline in 60 men 23 to 40 years old, with no real difference between the two oils.

Another study in rats found that both olive oil and coconut oil could enhance testosterone production. For sixty days, the rats were given feed to which seventy grams of soya oil, olive oil, coconut oil, or grapeseed oil per kilogram had been added.

Another theory is that Leydig cells begin to produce less testosterone due to cell damage from free radicals, the antioxidants in olive oil, and coconut oil may prevent cell damage.  Olive oil and coconut oil also increased the two enzymes necessary for testosterone production which are 3-beta-HSD and 17-beta-HSD. This was done in cell cultures so it’s not conclusive evidence that it works in real life. There has never been a study in humans to show that olive oil or coconut oil raises testosterone levels in man, but the study is interesting nevertheless.

Researchers examined how high-fat diets affected the anabolic signaling protein p70S6K which, in muscle, acts like a supervisor controlling the process of muscle building.

For example, the combination of resistance exercise and consuming whey protein produces a two-fold increase in the activity of the protein, p-70S6K1. In simple terms, p-70S6K1 is an important muscle growth factor. When leucine is administered after intense resistance exercise, it results in increased p70S6K.

Subjects exercised under different but similar caloric dietary regimens in the post-exercise conditions consisting of:

-High Carbohydrate Diet/Low Fat (10 grams of Carbohydrate, 2.5 grams of Protein and 0.8 Fat grams per kg per day) or

-Low Carb/ High Fat Diet- in the post-exercise recovery periods (2.5 grams of Carbohydrate, 2.5 grams of Protein and 3.5 Fat grams per kg of bodyweight).

At the end of the study, muscle glycogen was lower at 3 and 15 hours in the post-high-fat condition compared to high carbohydrate condition. This is to be expected following high intensity exercise with a low carb diet.

Again, this has been shown before as one of the adaptations to a high-fat diet where the metabolic machinery for fat burning has increased. The BIG surprise in this study was that the anabolic signaling pathway, p70S6K activity was higher at 3 hours post-steady state exercise in the high carbohydrate versus high-fat diet.

Key Points: Based on the current research, diets high in saturated and monounsaturated fats such olive oil are some of the best fats to increase natural testosterone production. Diets lower in dietary fats may reduce optimal levels of testosterone.