Will Flexing make you Bigger? Posing for Muscle Growth 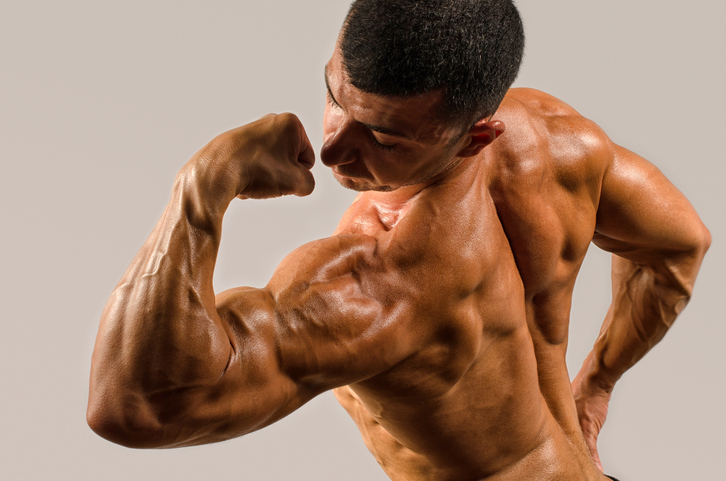 Flexing Muscles: The science of muscle growth has changed dramatically in the last year.  No longer can you say that the only way to get bigger is to lift heavy weights.  For example, moderate loads (20-30% 1RM) with blood flow restriction increases muscle size similar to that of high load (>70%1RM) training. What this proves is that it is not just the amount of weight you have on the bar that’s going to make muscles grow; there are other factors involved.  Additionally, isometric contractions (i.e. squeezing a muscle with no movement) can also increase muscle growth. Since isometric contractions can increase muscle growth, then it can be suggested that posing which consists of intense muscle contractions may potentially influence muscle growth. Posing is a lost art in bodybuilding.  Arnold Schwarzenegger used to spend hours posing, in fact, he started taking ballet classes to make him a better poser. Many lifters know that posing is extremely fatiguing and often neglected; but actively contracting your muscles can add inches, according to new research

Many lifters have heard of squeezing the muscle during workouts, but not many people follow this, as more often lifters just go to the gym and throw the weight around. One study reported positive increases in muscle mass from squeezing the muscle while lifting. Sixteen young men were allocated to training or a control group. The training group conducted a 12-week, three-day-a-week training program that consisted of four-second maximal voluntary contractions of biceps and triceps. The men would spend time simultaneously contracting their biceps and triceps. Muscle strength and thicknesses of biceps and triceps were measured before intervention and after four and 12 weeks. At the end of the study, muscle size also significantly increased in both biceps (+4%) and triceps (+4%) at 12 weeks. This study shows that isometric contractions can increase strength and muscle mass. So when you are in the gym, make sure you squeeze the muscle and contract it while lifting for maximal muscle growth.

In the latest study published in the Journal of Physiology and Behavior titled, “The acute and chronic effects of “NO LOAD” resistance training,” researchers made a shocking discovery:  Muscle can grow without weights! In fact, the study found that those who performed maximal contractions without any weights had the same amount of muscle growth as those subjects who lifted weights. Thirteen participants completed 18 sessions of a bicep curling exercise. Each arm was designated to either a NO LOAD or HIGH LOAD condition (70% one repetition maximum). In the HIGH LOAD, condition completed four sets of 8-12 repetitions with 90 seconds of rest between sets at 70% of their 1RM. For the NO LOAD condition, participants repeatedly contracted as hard as they could through a full range of motion without the use of an external load. The participants completed four sets of 20 repetitions with 30 seconds of rest between sets. At the end of the study, it was found that following six weeks of training, the HIGH LOAD condition increased 1RM strength more than the NO LOAD condition. However, upper arm muscle thickness increased in the NO LOAD condition, despite training with no external load. This increase was similar to that of HIGH LOAD training, which is a stimulus known to increase muscle size.

The Researchers concluded that:

1.)  Contracting muscle through a full range of motion with no external load increases muscle size similar to high load training.